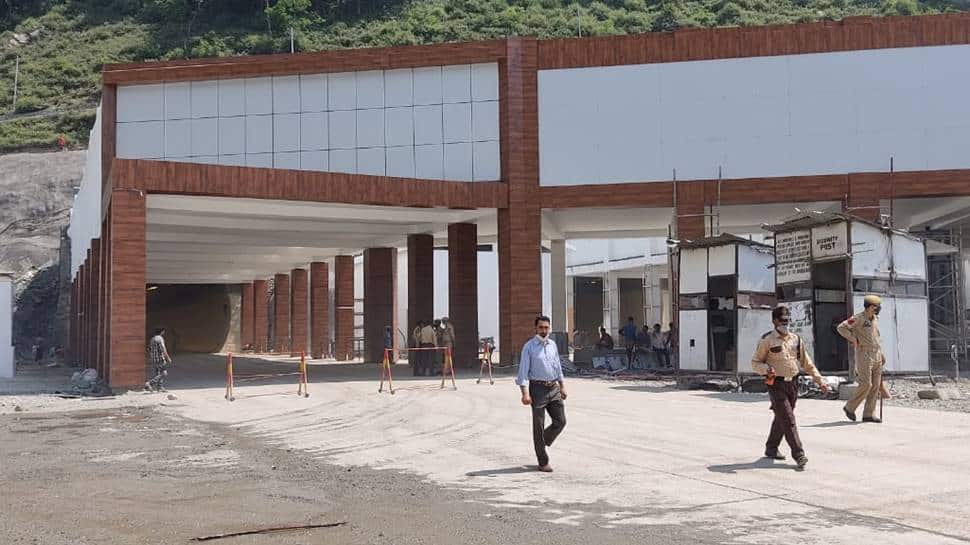 Banihal, Jammu and Kashmir: The all weather hi-tech tunnel connecting Qazigund and Banihal is likely to open for public in the next two weeks. Locals say its like a dream coming true. With the opening of this tunnel, the common people will heave a sigh of relief.

The 8.5 kilometer long tunnel built at a cost of Rs 2100 crores, will keep Kashmir connected to the country throughout year, the travel distance from Kashmir to Jammu will also be reduced by about 16 km.

Engineers believe that it’s a all weather tunnel as it’s built 400 meters below the existing Jawahar tunnel as it cuts the heavy snow and avalanche area hence there are less chances of getting road blocks in winters.

According to the construction company officials, the process of testing and commissioning of the tunnel is underway. The construction of this tunnel started in 2011 and it took more than 10 years to complete the project.

The construction work was delayed due to several reasons including the condition of the land inside the tunnel due to the excessive amount of water from the mountain beneath which tunnel passes. The company in charge of the construction has received permission for trial runs of traffic in the tunnel. The tunnel has two-lane-two-tubes with emergency exits at every 500 meters in between.

Muneeb Tak, Assistant General Manager of the construction company, said, “The tunnel can be considered different from the rest of the tunnel because it is a twin tube tunnel, two lanes in each tube, one driving and one emergency lane. We call it all weather because old tunnel Jawahar Tunnel area witnessed heavy snowfall and avalanches and land slides here is not much snowfall and it connects Qazigund to Banihal and there will be no problem of road clearance.”

The ventilation system in the tunnel is fitted with 126 jet fans, and 180 dumpers and their control depends on the condition of the tunnel and will be controlled from outside.

The movement of traffic will be very smooth due to the presence of two tubes and four lanes At the same time, a lot of technical things have been taken care while making of this tunnel because Himalayan  hills are full with water and water grouting had to be done to make this tunnel water proof.

JS Rathor, LNT Project Manager said, “Technically Himalayan geology you know is full of water and water came in this too and we systematically grouted it and stabilised a special polythene grout is done on it. We have controlled about 90% seepage, now we are doing grouting on top of the tunnel so that whatever sources coming from are diverted and the tunnel is water proof so that this tunnel become traffic and people friendly.”

The new tunnel has been designed keeping all these challenges in mind. The local residents are very exited and feel very happy.

Resident, Zahoor Ahmed Wani, says, “This tunnel will be of great benefit, in winter, Kashmir and Banihal remain cut off from the world, now this tunnel will always keep us connected. We thank the government as it is a great relief for common people.”

This tunnel is being considered very beneficial for Kashmir, it will bring relief to the common people, it will boost business and tourism especially winter tourism in Kashmir.  Because as soon as winter comes, these hills of Himalaya are covered by heavy snow and the Jammu and Kashmir National Highway remains blocked for weeks, but now it will not happen and Kashmir will remain connected to  the country throughout the year.

Engineering wing says the ventilation and electrical equipment in the tunnel is being tested. A total of 234 CCTV cameras, have been installed along the tunnel for security reasons.

This tunnel will bypass Jawahar Tunnel and Shaitan Nala on the existing route of the highway. Both these places pose the biggest problem for traffic when the weather is bad. Due to heavy snowfall in winter, the national highway is often closed for weeks as the present highway is prone to avalanches and landslides.

The tunnel is almost ready, all the civil work has been done, some electrical work is yet to be done. Now it depends upon the ministry to open this project to public.