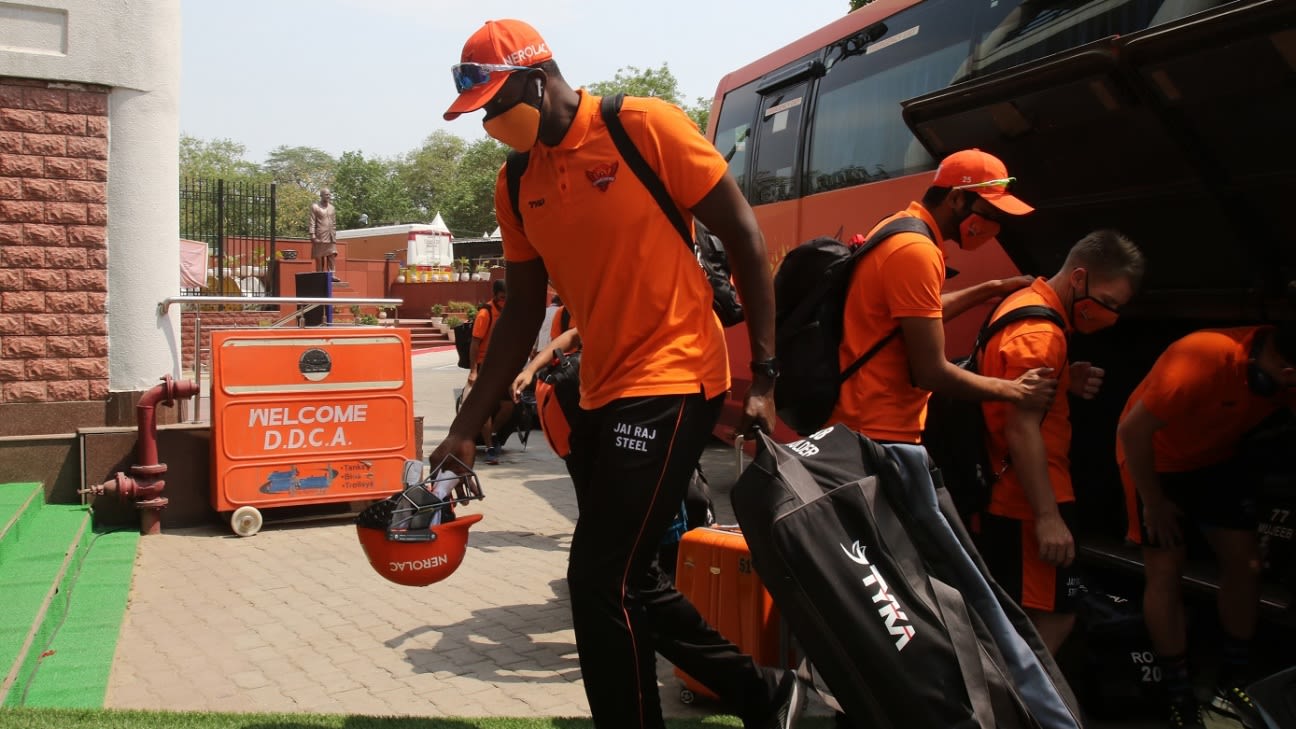 IPL 2021 has been postponed, following several positive Covid-19 cases across franchises over the past couple of days. There is no official word yet on when or whether the remainder of the tournament will be staged, though BCCI vice-president Rajiv Shukla was emphatic it “will happen” and a decision would be taken when the pandemic situation improved.

In a statement, the IPL said the decision was “unanimously” taken by the tournament’s Governing Council and the BCCI. “The BCCI does not want to compromise on the safety of the players, support staff and the other participants involved in organising the IPL,” the statement said. “This decision was taken keeping the safety, health and wellbeing of all the stakeholders in mind.

“These are difficult times, especially in India, and while we have tried to bring in some positivity and cheer, however, it is imperative that the tournament is now suspended and everyone goes back to their families and loved ones in these trying times.”

The statement also said the BCCI would do “do everything in its powers to arrange for the secure and safe passage of all the participants in IPL 2021”.

Shukla, speaking to Star Sports, hinted at the decision-making process. “Obviously the currently situation in India is pretty bad, everybody is scared, so even they [foreign players] might be scared. A few players spoke to their franchises about wanting to leave the country, the franchises also confided in us. Not many players were willing to leave the country, but obviously there is a panic-like situation, and if people are scared, we need to look at that aspect and take steps accordingly. So taking the players’ concerns, their families’ concerns in mind, we have taken this decision.”

Though the statement itself was unclear on the tournament resuming, Shukla’s comments suggested that it would at some point. “One thing I want to make very clear, it has not been cancelled – it has been suspended, it has been postponed, it has been deferred. So it will happen. The remainder of the IPL will happen but in due course, when the Covid situation improves, a decision will be taken.”

The announcement came following increasing Covid-19 positive cases within the IPL. The Sunrisers Hyderabad became the third franchise to register cases when it was confirmed earlier on Tuesday that Wriddhiman Saha had tested positive for Covid-19 and was isolating from the rest of the squad.

On Monday, the Kolkata Knight Riders’ Varun Chakravarthy and Sandeep Warrier tested positive and the day’s match between the Knight Riders and the Royal Challengers Bangalore in Ahmedabad was put off. Within hours came news from Delhi of two confirmed cases in the Chennai Super Kings camp: bowling coach L Balaji and a member of their service staff.

Balaji’s case, in particular, raised concerns among the other franchises as he was in the team’s dugout on May 1 during the match against the Mumbai Indians. Earlier on Tuesday, it was confirmed that the Super Kings had gone into isolation for a week. The Saha news soon followed, before the tournament’s postponement was announced.

What happens to the overseas players now?

The Australians, who can’t go home for another ten days, are expected to spend the time in the Maldives, joining broadcast commentator Michael Slater. There are 24 Australians in the playing and coaching staff among the franchises; though some, like Dan Christian, have playing deals in England, and even those borders are currently sealed to non-UK nationals flying in from India.

The two Bangladeshi players, Shakib Al Hasan and Mustafizur Rahman, will have to undergo 14-day quarantine once they are back home, according to the country’s health authority, which refused the BCB’s request for a shorter isolation period. They are expected to return home in a chartered flight in a couple of days. They were both named in Bangladesh’s preliminary squad for the ODI home series against Sri Lanka, which is likely to start on May 23. The BCB will be hoping that the pair arrives in the next couple of days so that they have a few days of training, after the 14-day quarantine, before the first ODI in Dhaka.

The ECB said it was in “close contact with our players and staff in India as arrangements are put in place for them to return home safely”.

Cricket South Africa said those travelling back to South Africa would undergo home quarantine “in line with the current World Health Organization recommendations”.

New Zealand recently lifted its travel ban for India but there are limited flights between the two countries, and the New Zealand players will have to undergo a 14-day quarantine whenever they get home. NZC issued a statement saying it was liaising with different authorities to find a solution.

The tournament has been held with India in the grip of a vicious second wave of the pandemic, with the six host cities – New Delhi, Mumbai, Kolkata, Chennai, Bengaluru and Ahmedabad – among the worst hit. The IPL’s “caravan” model of scheduling, with two of the six venues being used at any given time, cut down on air travel and other risk factors as compared to the usual home-and-away concept, but still left teams vulnerable.

The rising numbers – around 400,000 new positive cases daily over the past few days – prompted several countries to ban travellers from India. The Australian government even imposed a ban on its own citizens returning from India until May 15 and said any transgression would be deemed a criminal offence.

It led to a statement last week from the BCCI that sought to reassure all stakeholders and the eight teams that the tournament bubble was “totally safe”.

However, the players were getting anxious. Liam Livingstone and Andrew Tye (both Rajasthan Royals) and the Royal Challengers pair of Adam Zampa and Kane Richardson returned home – to England and Australia – before the clampdowns. The Delhi Capitals lead spinner R Ashwin also left the IPL after the first leg to attend to his family, many of whom had tested positive for Covid-19. Senior Indian umpire Nitin Menon too returned home to Indore to attend to his parents, who were positive. Australian umpire Paul Reiffel admitted he was minutes away from leaving India until the travel corridor through which he was planning to return was shut off.

President Joe Biden announced that his administration will share millions more doses of Covid-19 vaccines with other countries in addition to the 60 million doses of the AstraZeneca vaccine he has already committed to sharing by July 4.