Source: Firstpost | Title: Ex-Congress MP Jitin Prasada is marginal player, but his switch to BJP raises questions for both parties 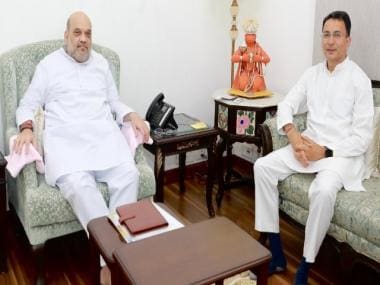 The BJP has always made a big production of its shtick about the Congress’ dynastic politics, but now it is welcoming a motley crew of dynasts into its ranks with no apparent sense of irony

There’s been yet another ‘defection’ from the Indian National Congress to the Bharatiya Janata Party (BJP). On 9 June, Jitin Prasada, a one-time member of Rahul Gandhi’s inner circle and third-generation leader from Uttar Pradesh, switched sides.

At first sight, Prasada’s change of allegiance is no big deal. He had been on the margins for some time and had been gesturing at the change for two years or so. After Jyotiraditya Scindia’s crossing over to the saffron camp in 2020, Prasada’ switch comes as even less of a surprise.

The difference, however, is that Scindia — now a BJP Rajya Sabha member — was still a close friend of Rahul Gandhi when he jumped ship. And while his switch was politically consequential leading to the fall of the Kamal Nath-led Congress government in Madhya Pradesh and the installation of the current BJP government in the state, Prasada’s exit will have no direct consequences. And, if anything, only a marginal effect on both the party he has left and the one he has joined.

What are the direct consequences of Jitin Prasada’s exit

Let’s first deal with the direct consequences. Since Congress is a small player in Uttar Pradesh, Prasada’s exit will have practically no incremental effect on the party’s prospects in the state.

It’s been said for a while now that one of the Congress’ strategies in Uttar Pradesh has been to court the Brahmin community — which constitutes 11-12 percent of the state’s population — given the perception that they have been alienated from the BJP by Chief Minister Adityanath’s supposed promotion of Thakurs, his caste brethren.

But Adityanath has been around since 2017 and the Congress managed to win just under 6.5 percent of the total votes polled in the 2019 Lok Sabha elections in the state. After an organisational revamp in the state, it won no seats and around 7.5 percent of the votes in seven Uttar Pradesh Assembly by-elections held in November 2020. It contested in six seats and the only takeaway was the second position in two of those seats.

In other words, people weren’t exactly holding their breath waiting for a Congress revival in Uttar Pradesh via a shift in electoral preferences amongst Brahmins, engineered by Prasada. His ‘Brahmin Chetna Parishad’ platform has never amounted to much.

What does Jitin Prasada bring to BJP?

The question, then, is what Jitin Prasada can do for the BJP. Not a lot, it appears. Of course, Prasada could well ask the converse question: What can the BJP do for him? We don’t know. But we can see that the tepid welcome laid out for Prasada raises some important questions about the party.

First, given Prasada’s current stature, what is the thinking that led to his induction into the saffron party? It could be that the BJP is comfortable about getting anybody from Congress on board just to embarrass their only ‘national’ antagonist. If that is so, the tactic cuts many ways.

The BJP has always made a big production of its shtick about the Congress’ dynastic politics and the Gandhi family’s ‘entitled’ approach to public life. Now it is welcoming a motley crew of dynasts into its ranks with no apparent sense of irony.

On one end of the scale are members of the ‘Lutyens elite’ – Prasada and Scindia – and dotted along the spectrum are people like Rita Bahuguna Joshi of Uttar Pradesh, who joined from the Congress in 2016, and Sisir Adhikari of West Bengal, who joined in December 2020. There are many others.

The actual gains are also not very obvious. In Bengal, indiscriminate poaching, mainly from the Trinamool Congress, but from other parties as well, contributed significantly to the BJP’s below-par performance, going by its own expectations. That should be a cautionary tale.

But, specifically speaking, what is expected of Prasada? That he can counterbalance Adityanath’s control in Uttar Pradesh by bringing in some presumptive Brahmin vote? That is a risible proposition. It can be said with certainty that the managers of one of the most efficient electoral machines around wouldn’t be making such an elementary error.

So, it’s back to the hypothesis that the welcome for Prasada is basically meant to further embarrass the Congress and strip it barer. This kind of an open-door policy could, however, backfire, given that the political situation in Uttar Pradesh is generally quite labile and, specifically, there seems to be some churning within the BJP already. Reports have it that there is a power struggle centred on Adityanath.

What’s next for Congress?

Be that as it may, just because Prasada isn’t a great loss, doesn’t mean that the Congress shouldn’t take note of his exit. It should bring home to the party the urgent necessity of getting its leadership issue untangled. Once it does have a proper president, it can start thinking about rehabilitating its organisation if it wants to re-emerge on the national stage.

Paradoxically, becoming relevant in Uttar Pradesh has to be the bedrock on which national ambitions can rest for the Congress, which in 2019 still cornered around 21 percent of the national vote.

Putin’s first summit with the fifth US president of his tenure, Joe Biden, was about mutual respect — and the meeting in Geneva could, both of them said, lead to a more predictable, if still tense,… Read More | Source: NDTV News…