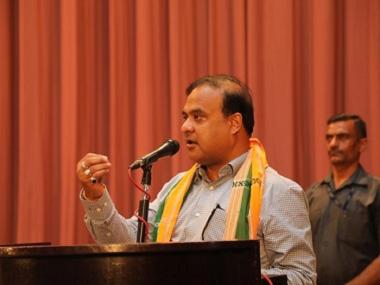 In 2018, Sarma with the BJP’s Tripura in-charge, managed to break the entire top leadership of the state Trinamool Congress and the Congress to bring them into the BJP fold

The BJP-led NDA has retained power in the state by bagging 75 of the 126 Assembly constituencies. However, as the saffron party had not projected a chief ministerial face, the question now is whether Sarbananda Sonowal will get another term as CM or if Sarma will get the top post.

Sarma has been credited as the man behind the BJP’s saffron surge in the North East.

But a few years ago, not many could have predicted such a career path for the 51-year-old convenor of the North East Democratic Alliance, once a former Congress strongman and ‘blue-eyed boy’ of former chief minister Tarun Gogoi.

Sarma had an early start, joining the All Assam Students Union (AASU) in 1980. He was, at the time, in Class 6. By 1981, as the crackdown on AASU was beginning, Sarma was tasked with carrying the press releases and materials for the press every evening.

A few years later, he had risen to the position of AASU’s Guwahati unit’s general secretary.

After joining the Congress in the 1990s, he finally contested polls from Guwahati’s Jalukbari in 2001. He defeated Asom Gana Parishad leader Bhrigu Kumar Phukan, and has since held onto that seat.

Sarma served in multiple Congress governments and held a slew of positions including the Minister of State for Agriculture, Planning & Development, Finance, Health, Education, and Assam Accord Implementation from 2002 to 2014.

Serving in the Gogoi cabinet, Sarma is said to have been the brains behind the Congress’ victory in the 2011 Assembly polls, when it won 79 of 126 seats.

Unfortunately, with regard to his tenure in Congress, it was all downhill from there.

Sarma’s career in the Congress was also dogged by allegations of corruption and critics dubbing him as a ‘Machiavellian operator’.

A falling out with Gogoi over the political prospects of the chief minister’s son Gaurav and a snub for a ‘pride of place’ in party high command led him to join the BJP just prior to the 2016 Assembly polls.

By August 2016, he was appointed convener of the then-newly formed NEDA.

In 2018, Sarma with the BJP’s Tripura in-charge, managed to break the entire top leadership of the state Trinamool Congress and the Congress to bring them into the BJP fold as well as build an Assam-style alliance with the Indigenous Peoples Front of Tripura (IPFT).

Born on 1 February, 1969, to Kailash Nath Sarma and Mrinalini Devi, Sarma studied at Guwahati’s Kamrup Academy School and Cotton College. He was general secretary (GS) of Cotton college Student’s Union from 1991 to 1992.

He has an LLB From Government Law College and a PhD from Gauhati University. Sarma practised law at Gauhati High Court from 1996 to 2001.

He married Riniki Bhuyan Sarma on 7 June 2001, with whom he has a son and a daughter. In 2017, he was elected as the Badminton Association of India president.