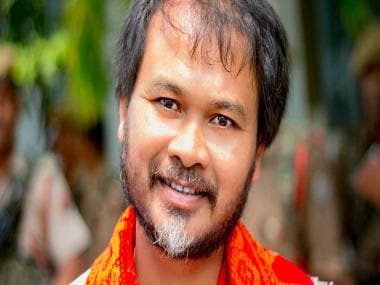 Gogoi became the first Assamese to win an election without hitting the campaign trail.

The founder of the newly floated Raijor Dal polled 57,219 votes as an Independent, garnering support from 46.06 percent of the electorate.
The Congress, which had initially backed the Raijor Dal chief, ended up giving ticket to Subhramitra Gogoi, who came third in the contest.

Gogoi became the first Assamese to win an election without hitting the campaign trail. The RTI activist, in an attempt to reach out to the
people of the state, wrote several open letters from jail, highlighting problems that need to be addressed. His 85-year-old mother Priyada Gogoi campaign for her imprisoned son along the narrow lanes of Sibsagar and was joined by renowned social activists Medha Patkar and Sandeep Pandey.

Hundreds of youth volunteers and members of the Raijor Dal also took to door-to-door campaigning ahead of the three-phase polls.

Gogoi has been in judicial custody ever since December 2019, when he was booked under the stringent UAPA during the protests against the Citizenship Amendment Act (CAA).

Gogoi, the founder-leader of the peasants’ rights group the Kisan Mukti Sangram Samiti (KMSS), which was formed in 2005 amidst a forest rights movement in Golaghat’s Doiang-Tengani area.

Gogoi is known to frequently use the Right to Information Act to obtain documents.

According to Amnesty International, the KMSS campaigns to protect the lives and livelihoods of farmers, including those from indigenous Adivasi communities, by “securing land and forest rights, exposing corruption and opposing the construction of big dams that could forcibly displace peasants and threaten the lives of thousands and destruction of flora and fauna”.

Over 100 cases have been registered against Gogoi to date, as per Amnesty International.

In 2008, Gogoi came to national prominence after being awarded the Shanmugam Manjunath Integrity Award in 2008 for his relentless fight against corruption.

In 2010, Gogoi was given the national Right to Information Award by the Public Cause Research Foundation for helping expose a 12.5 million dollar scam in Sampoorna Gram Rozgar Yojna in Assam’s Golaghat district.

He attended Guwahati’s Cotton College where he studied English literature.

Gogoi joined the ‘United Revolutionary Movement Council of Assam’ after finishing his graduation.

Later, he left this group and joined Natun Padatik magazine as its secretary.