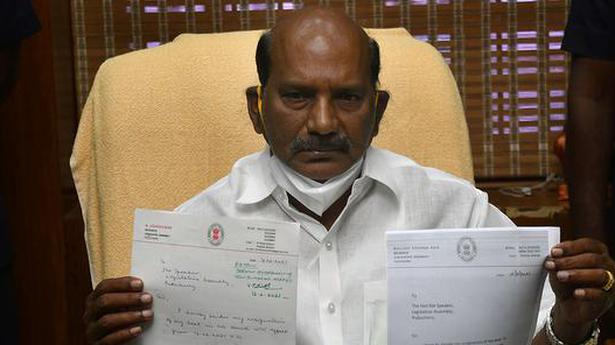 While disenchantment with the erstwhile Narayanasamy-led government is the stated reason for legislators in the Congress-DMK alliance resigning from their posts, the timing of their decisions fits more with moves in the political game that eventually culminated in the fall of the Ministry on Monday.

A. John Kumar, while putting in his papers last week, said, “I had sacrificed Nellithope constituency for the Chief Minister. I was offered a Ministerial post but was not given. I also asked for a seat in the coming Assembly elections for my son but the Congress has denied it. I was planning to quit along with Mr. Namassivayam also.”

K. Lakshminarayanan, who put in papers on Sunday barely hours before the trust vote, said “I thought it was the right opportunity to express my anguish and pain for being sidelined so hence resigned the MLA post before the elections.” He had said his vote made no difference in a hopeless situation for the government.

K. Venkatesan, who has since been suspended by the DMK, had also submitted his resignation on Sunday. The reason he was that as a legislator representing Thattanchavady, he was not able to meet the needs of the people in his constituency since there was no allocation of funds under the MLA Local Area Development fund.

Karti Chidambaram urges Congress to give 33% reservation for women candidates in Parliament Read More | Source: THE TIMES OF INDIA…

New cases of coronavirus infection in India were recorded above 18,000 for the third consecutive day taking the total tally of COVID-19 cases to 1,12,29,398, according to the Union Health Ministry data updated on Monday. The active cases also registered an increase for the sixth consecutive day and the COVID-19…

National Conference president Farooq Abdullah on Sunday said the people of Jammu and Kashmir are praying that the recent agreement between India and Pakistan on ceasefire holds as it will bring them some relief. Peace is in the larger interest of the region, he said. “Hostilities on borders bring only…

The second part of the Budget session of Parliament is set to begin from Monday but its duration is likely to be curtailed as most top politicians would be busy campaigning for assembly polls taking place in March-April. As of now, the session will conclude on April 8. Sources said…

The Congress party on Sunday released a list of three candidates for the upcoming assembly election in Assam. Bhaskar Jyoti Baruah has been fielded from Titabar, Bharat Ch. Narah from Naoboicha and Padma Lochan Doley from Dhakuakhana.  Read More | Source: IndiaTV…

Joseph Perez’s final moments, caught by a Fresno Police officer’s bodycam in 2017, were released under federal court order. The family, who has filed a lawsuit against law enforcement officers, paramedics and others, requested the video’s release.

State Senate Majority Leader Andrea Stewart-Cousins is now calling for the resignation of New York Gov. Andrew Cuomo — a sign of escalating pressure from members of his own party to step aside amid allegations of sexual harassment and inappropriate conduct.

Brian Stelter says royals coverage is big business for the British press and points to the financial motivations of the players who are covering Oprah’s interview with Harry and Meghan. Richard Palmer and Kristen Meinzer debate how the couple are portrayed in the press.

CNN’s Brian Stelter shows you how television production has adapted as anchors and guests continue to work from home during the Covid-19 pandemic.

BuzzFeed News reported that New York Times columnist David Brooks had not told his readers about his paid position with The Aspen Institute, whose donors include Facebook, a company Brooks has written about. Brooks has since resigned from the role with the think tank.