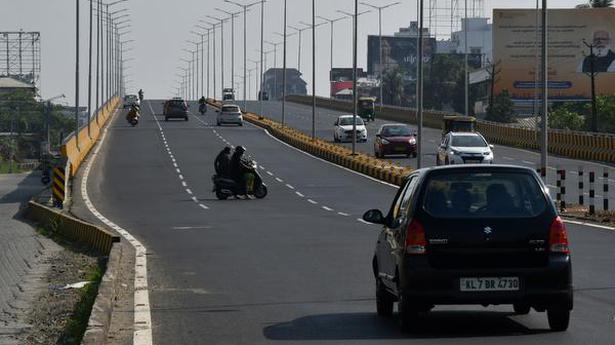 The areas that had been acquired over three decades ago for the Tripunithura bypass have been integrated in the new alignment of the 165-km Kochi-Munnar National Highway, which the National Highways Authority of India (NHAI) will develop into a four-lane stretch. It will establish port-to-port connectivity between Kochi and Tuticorin through Munnar and Theni.

As per the revised alignment, the NH will take off a kilometre south of Kundannoor Junction , to prevent congestion at the junction. The stretch will be 45 metres wide, official sources said.

The PWD (NH Wing), which readied the alignment for the 8.50-km-long Thripunithura bypass, a project which ended up as a non-starter due to land acquisition issues, inadequate fund allocation, and lack of political will, had requested the NHAI that the changed alignment of the Kochi-Munnar NH should pass through the alignment finalised for the bypass project.

“The PWD had partly completed land acquisition for the first phase of the bypass, from Mattakuzhy to Thiruvankulam. The NHAI will most likely include this stretch in its upcoming NH development project. With the NHAI taking steps to speed up development of the Kundannoor-Theni NH, we have requested that its entire alignment [including areas that fell in its second phase] be merged with that of the bypass, so that the long-overdue bypass project can be realised. Members of Parliament too are in sync with this,” said a senior official of the PWD (NH Wing).

The advantage is that the NHAI will not have to acquire land afresh in areas that fall within the ambit of the Thripunithura bypass project. Still, landowners whose plots fall in the second phase work of the bypass are uncertain whether the NHAI will include that portion of the alignment in the revised alignment.

R. Varghese, a landowner said the PWD had paid only part or token compensation to people whose lands were acquired under the the first phase of the project — on the 3.44-km Mattakuzhi-Thiruvankulam stretch. “Many people have not been compensated, although their lands were frozen to be acquired at a later stage. They were unable to sell off lands or even modify their houses during the past over 30 years, as a result. All of them must be paid fair compensation as per the new land acquisition Act,” he said.

The inclusion of the Thripunithura bypass in the alignment is also crucial from the point of view of the seaport extension of Seaport-Airport Road, which now ends at Karingachira in Thripunithura. This is all the more important, since the commissioning of the Vizhinjam port will increase the influx of container lorries into Kochi through the NH from Alappuzha. The Kundannoor-Pettah-Karingachira stretch is too narrow and congested to accommodate even the present volume of vehicles, sources said.

Sources in NHAI said with the revised alignment being fixed, a detailed survey is under way to ready the list of plots that will be acquired to develop the Kochi-Munnar NH. It will take up to six months to get over. The new alignment will most likely cross the Kundannoor-Angamaly NH Bypass, at Puthen Cruz, where a flyover might have to be built, they said.

West Bengal Chief Minister Mamata Banerjee on Wednesday sharpened her attack on the prime minister over the resurgence of Covid-19, terming it a “Modi-made disaster” and demanded that he quit if unable to provide adequate medical supplies to combat the disease. She alleged that 65 per cent of the drugs…

The former CEO of Reddit speaks up about the discrimination she has faced in her career and urges companies to take another look at how inclusive their workplaces really are.

A Columbus, Ohio, police officer shot and killed a Black teenage girl after she allegedly attempted to cut two females with a knife, according to officials and body camera footage. The bodycam footage has been put in slow motion and blurred by the Columbus Division of Police.
…