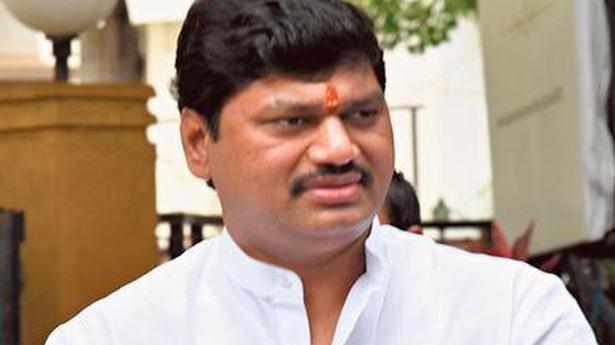 Maharashtra Social Justice Minister Dhananjay Munde who was on Tuesday accused of rape by a woman singer while denying the charge accepted that he was having extra-marital affair with the complainant’s sister and they had two children. He said that the duo along with their brother was blackmailing him.

In her complaint filed with c the singer accused Mr. Munde of sexually harassing her since 2006. She said the leader promised her of introducing her in Bollywood claiming to being close to film directors and producers. She said that Mr. Munde “sexually harassed her and had physical relation with her against her will”.

Mr. Munde said in a statement that he had been in a relationship with a woman outside his marriage since 2003. “My family, wife and friends knew. The woman and I have two children to whom I have given my name as a parent in all their documents. Both of them are part of my family,” he said, adding that he has been taking care of the said woman, as well as her brother by helping him in his business.

Alleging that the woman, her brother and her sister started blackmailing him since 2019, by threatening to make public private material, he said that he had already filed a police complaint and a case was at present being heard at the Bombay High Court.

“The present complaint is to blackmail me and pressure me to settle court case in her sister’s favour of which I have evidence. This is nothing but an attempt to defame, pressure and blackmail me,” he said.

The Nationalist Congress Party, to which Mr. Munde belongs, said that it would wait for the outcome of the police probe. According to reports, a woman Assistant Commissioner of Police will be probing the complaint in which an FIR has not yet been filed.

Election process not only succeeded but sustained itself since 1951: CEC Read More | Source: THE TIMES OF INDIA…

jan25v42 – Govt must bring another bill on agriculture in Parliament’s upcoming session TMC Read More | Source: THE TIMES OF INDIA…

Even as the Delhi Police has permitted agitating farmers to hold 'Kisan Gantantra Parade' on Republic Day, it has also made sure that law and order doesn't go for a toss. In a 37-point listicle, the Delhi Police has made it clear that the rally can have under 5,000 participants and…

Addressing a huge crowd of farmers gathered at Mumbai’s Azad Maidan on Monday, Nationalist Congress Party chief Sharad Pawar slammed Maharashtra Governor Bhagat Singh Koshyari for not meeting farmers who have been protesting in solidarity with those sitting on agitation at Delhi borders for over two months.  Read…

President Joe Biden signs an executive order to repeal a Trump-era ban on most transgender Americans joining the military alongside Defense Secretary Lloyd Austin. Biden says the executive order is “enabling all qualified Americans to serve their country in uniform.”

Jay Carney, Amazon SVP, tells CNN’s Julia Chatterley that in addition to vaccinating their own front-line workers, the company stands ready to help the Biden administration with vaccinations by offering their facilities, logistic capacities, and machine learning to track progress.

Poverty in Italy rose during the first 3 months of the coronavirus pandemic, according to a report by Caritas. The charity says it’s seen an increase in the number of people asking for help for the first time. CNN’s Melissa Bell reports.