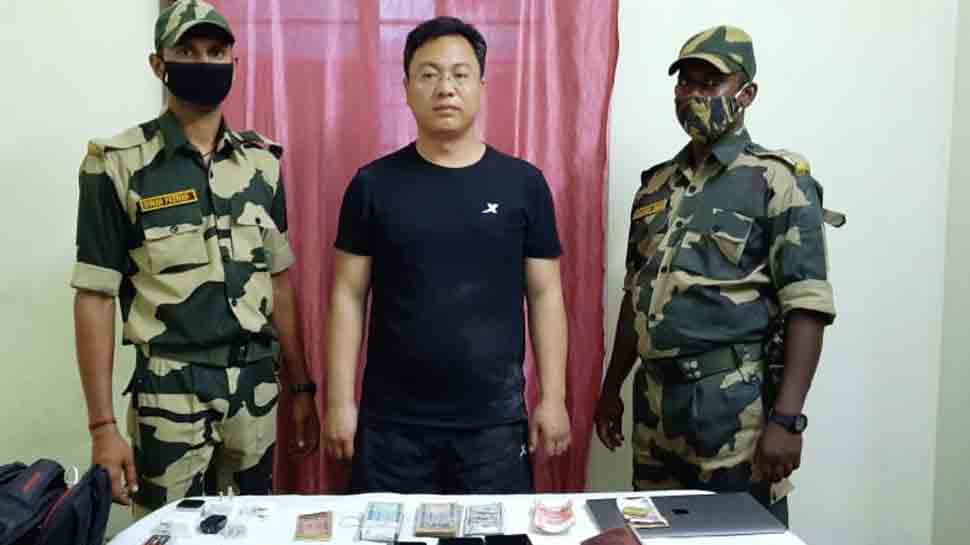 New Delhi: The Border Security Force (BSF) on Thursday (June 10) apprehended a Chinese intruder along the India-Bangladesh international border in  Malda district of West Bengal while he was trying to cross the border illegally. The 35-year-old man, dressed in a black sweatshirt, pants and shoes, was intercepted by a BSF party around 7 am when he was infiltrating into the Indian territory. Upon being challenged by the forces, the intruder tried to run away from spot, but he was chased, nabbed and brought to the Border Out Post Mohadipur for questioning.

A Chinese passport bearing a Bangladeshi visa, a laptop and three mobile phone SIM cards were found on the man who was identified by security officials as Junwei Han. He has been kept at the Kaliachak post of the border guarding force, and a BSF spokesperson in Delhi said an interview of the individual is underway by agencies concerned.

Sources said the Chinese man does not probably understand English, and hence, a security officer conversant in the Mandarin language has been called in for a joint questioning session by officials of the BSF, local police and the intelligence agencies.

During the interrogation, the Chinese intruder revealed his name as Han Junwe, aged 36, and a resident of Hubei, China. He revealed that he reached Dhaka, Bangladesh on June 2 on a business visa, and stayed there with a Chinese friend. On June 08, he came to Sona Masjid in Chapainawabganj district of Bangladesh and stayed at a hotel. On June 10, when he was trying to enter inside the Indian territory, he was caught by the BSF troops.

He further revealed that he had visited India four times before. He had come to Hyderabad in 2010 and Delhi Gurugram thrice after 2019. According to him, he has a hotel in Gurugram named ‘Star Spring’.

Some of his colleagues in this hotel are from China and rest of the Indian people are working as employees. Upon further questioning, he revealed when he had gone to his hometown of Hubei (China), one of his business partners, namely Sun Jiang, sent him numbers of 10-15 Indian mobile phone SIMs after a few days, which were received by him and his wife.

However, a few days ago, Jiang was arressted by the ATS Lucknow. Junwe told BSF that his business partner disclosed about him to the interrogators after which a case was registered against him and his wife in Lucknow.

Following the development, he couldn’t get an Indian visa in China, and therefore he got a visa from Bangladesh and then Nepal to reach India.

Executive Producer of Niantic, Phil Hong announced the new Transformers: Heavy Metal mobile game. Niantic says the game will enter soft launch in select countries soon, and global launch is planned for later this year. The company is taking registrations of interest for the game on the official site, and…

The tea shops and juice shops have also been permitted to operate from 9 am upto 5 pm by strictly following COVID-19 appropriate behaviour in/in front of their premises. Read More | Source: Zee News…